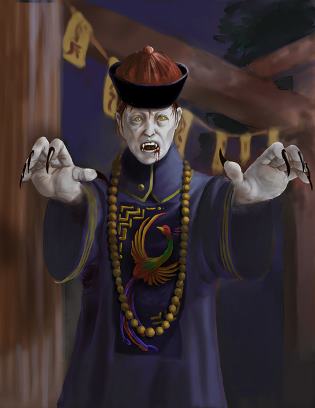 Jiang Shi 僵尸 - A Chinese vampire which feeds on the blood of the living. Often seen wearing Qing Dynasty official costume, its corpse-body was so stiff that it had to hop to move around. It could be immobilized by pasting a Taoist talisman on its forehead. When we were kids, my brother and I watched many movies with jiang shi hopping around looking for prey. At night, we would hold out our arms and hop around to scare each other.