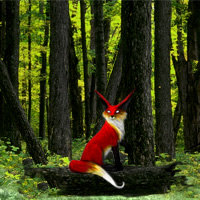 When my mother was a little, her and her family were escaping the invasion of Japanese soldiers in Nanjing. En route, they found refuge in an abandoned old Chinese courtyard home where strange paranormal events began occurring. Frustrated, my Uncle raised his fist and cursed loudly at the house, "Damn you huli jing!" According to Chinese folklore, huli jing are fox spirits or demons that cause mischief or seduce humans. The next morning, they found all the dishes shattered onto the kitchen floor into a million angry pieces and rice splashed all over.