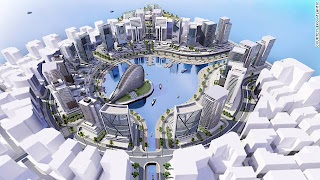 In the Beijing Swag, Simon Wang, the billionaire father, considers a real estate development project with Angola. He says "Africa is vastly expanding and growing rapidly."
Gleaming high-tech cities and vast modern compounds are being planned across Africa. Some say they are the continent’s future, others describe them as “urban fantasies.” Check out these ambitious new developments and let us know what you think - http://on.cnn.com/15kZBJQ